The age-old question of what came first — the chicken or the egg — may never be answered. But in the eyes of The Suter Company, the chicken definitely came first. Which may be why the Sycamore, Ill.-based food manufacturer was still using an antiquated conveyor system from an old chicken processing line for its current deviled-egg processing line.

However, the chickens and the eggs weren’t too compatible…as far as conveyors go.

The Suter Company, which offers an extensive line of refrigerated and canned salads, dips and spreads, snack and lunch kits, and other products under its Sycamore Farms brand, as well as contact and private labels throughout North America, was also looking to revamp the way it processes food by going to lean manufacturing. As the company became lean it became clear that the chicken conveyor had to be replaced. 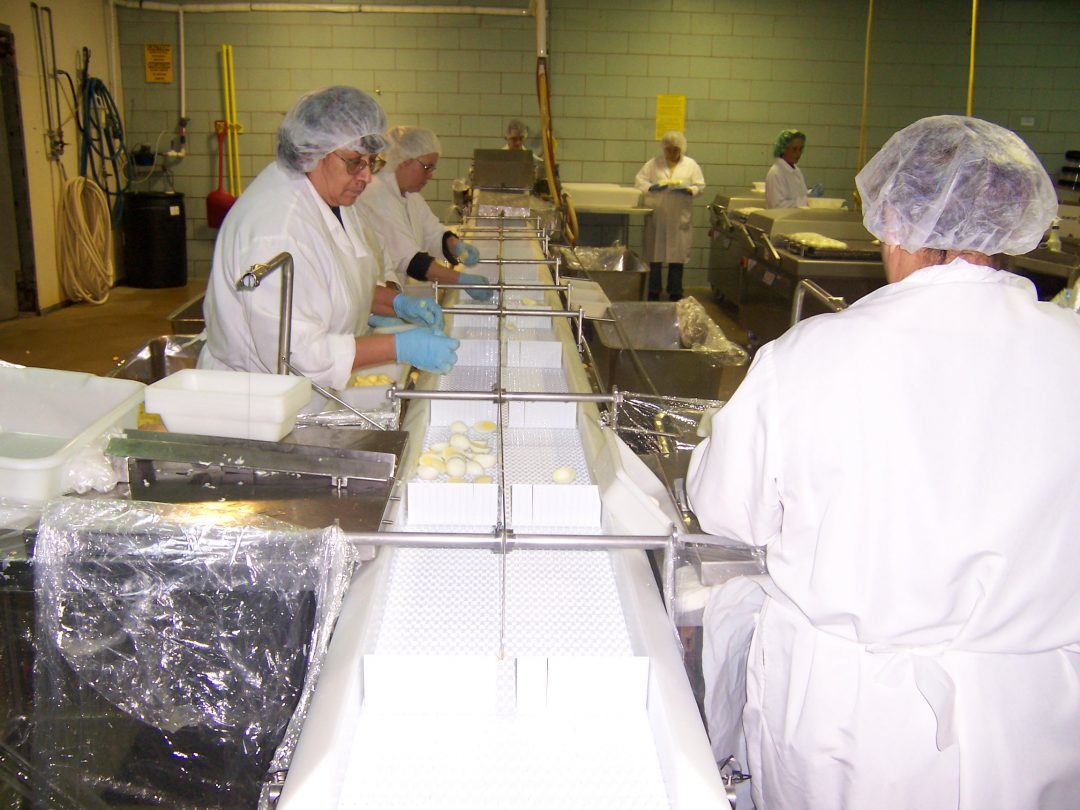 Looking to address efficiency and sanitation concerns, The Suter Company turned to Dorner’s 7400 Series sanitary conveyor platform to get the job done. The 7400 Series, part of Dorner’s AquaPruf family of stainless steel conveyors, are designed solely for sanitary applications, such as The Suter Company’s deviled-egg line where cleanliness and durability in the conveyor are a must.

“What made this application unique is that we had to handle both the hard-cooked egg halves, as well as handle the yokes and keep them separate,” said Maggie Beauchamp, sales engineer for Gull Material Handling Company, a Barrington, Ill.-based distributor.

Beauchamp said the company also wanted to get a better grasp on employee production. So the conveyor was designed to index the rate of production.

“With the new conveyor system, the production rate isn’t dictated by the operators on the line,” she said. “Rather it gives control of the production line back over to the customer.”

Results were seen almost immediately. Previously it took on average 60 minutes from the time an egg box was opened to the time it was processed and packaged. With the 16-inch wide, 28-foot long 7400 Series conveyor, that time dropped to only 8 minutes — a savings of almost 20 percent per case. 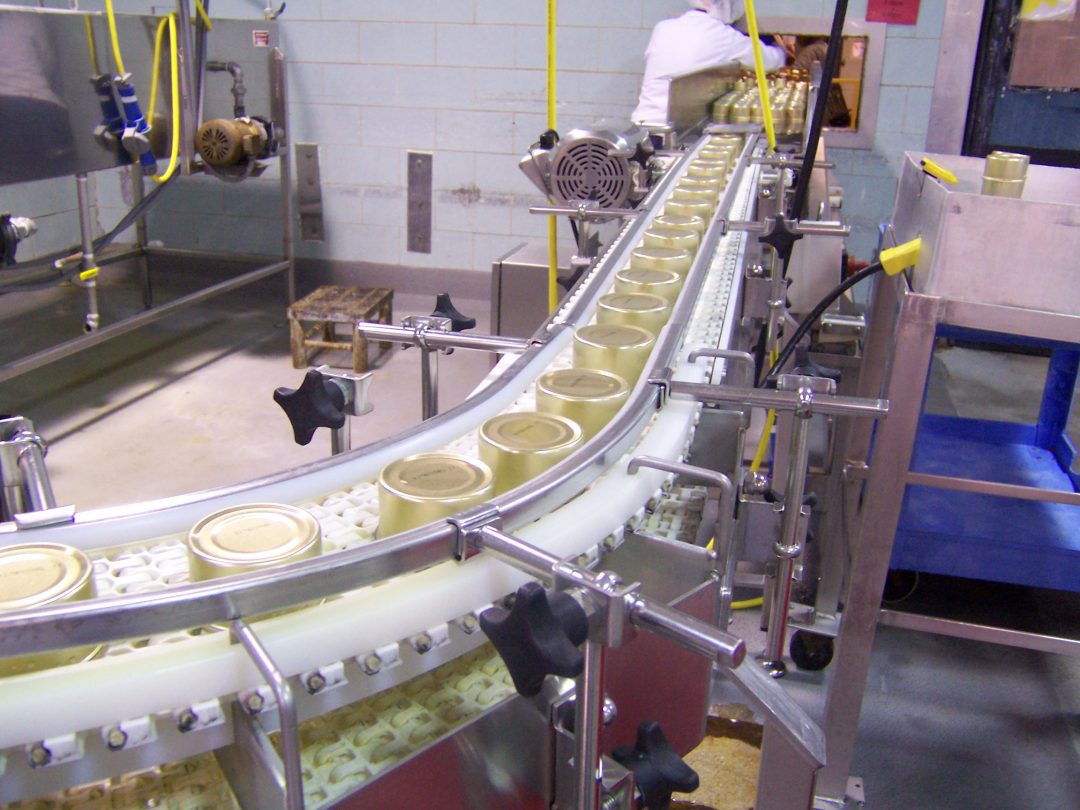 “By dictating how fast individual employees work, they no longer dictate the production levels for the day,” said Cliff Chesser, plant manager at The Suter Company. “The conveyors do that and allow us to control production levels.”

The indexing rate not only dictates production levels but also aid in packaging the deviled eggs, which occurs about every 10 seconds at the end.

The conveyor operates 10 hours a day, four days a week. To keep the conveyor clean while operating, jets positioned underneath the conveyor on the return side shoot a water-and-cleaning agent mix into the passing belt. The 7400 Series is completely stainless-steel and has no fasteners in the food zone. Bearings are 400 stainless-steel rated to withstand constant daily high-pressure washdowns between 100 and 1,500 PSI. The 7400 Series can also be disassembled by one person, without tools, in a matter of minutes for cleaning.

“From a maintenance and efficiency standpoint it works as well as we could have hoped for,” said Matt Christ, deviled egg line department manager at The Suter Company.

A second Dorner 7400 Series was installed to feed empty cans from a staging area into a packaging line. This 6-inch wide, 93-foot long conveyor leaves the staging area, hugging several walls as it elevates around obstacles to arrive at the packaging line. The conveyor operates four days a week, 10 hours a day. 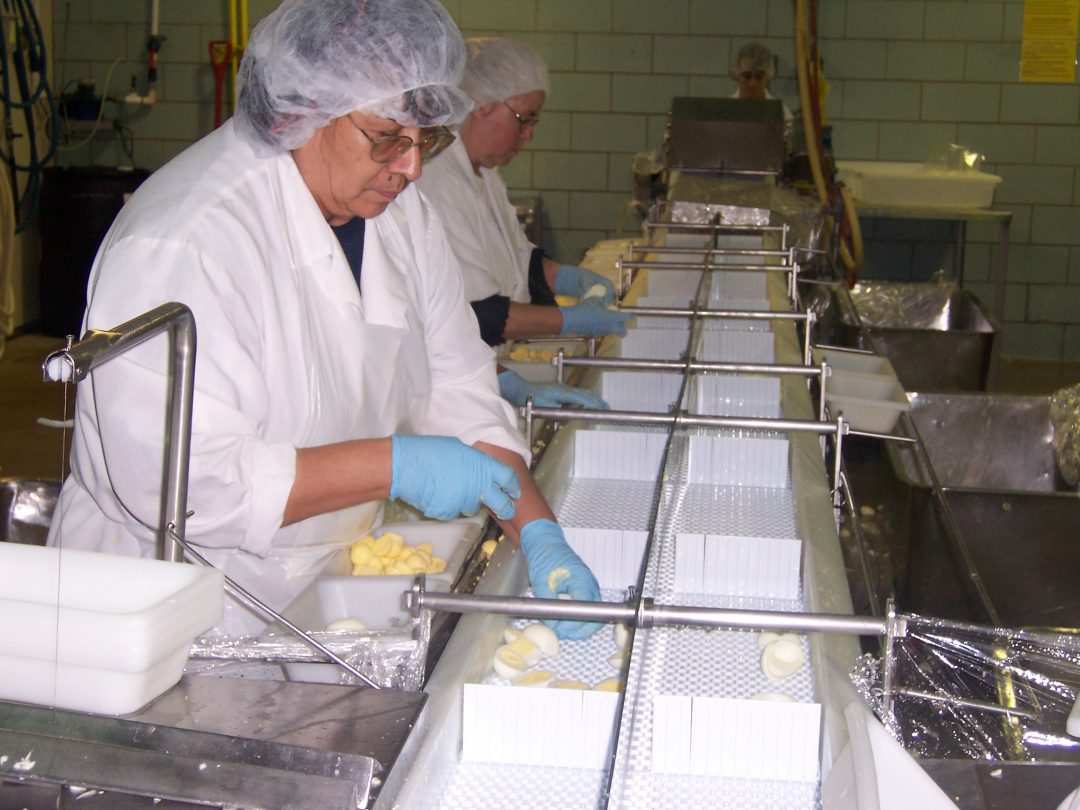 “We had it designed in our head how we wanted the can conveyor line to work,” Chesser said, “and Dorner and Gull were able to take that vision and design it into reality. We got crammed into a very short window to get it up and running and both companies stepped up and said they could do this.”

Now installed for almost a year, Chesser says both conveyors are working great for the company.

“Short of being engineers ourselves in not knowing the trials that we were going to face going to a new can line, I don’t believe we could have engineered those conveyors any differently,” Chesser said. “They do exactly what we need them to do. Dorner would be a recommended supplier that I would give anybody if they are looking for a conveyor system.”